“Promise me you’ll always remember…you’re braver than you believe, and stronger than you seem, and smarter than you think.” -Christopher Robin to Pooh

I haven’t posted in over a week – not because nothing has happened, but because sometimes there is just too much in my head that it seems impossible to get out. It’s overwhelming, really. And even stressful. I feel a need keep things light-hearted and humorous, because I’m pretty sure that anyone reading this has their own assortment of troubles and worries. I was recently talking to a very wise young woman and she told me that if everyone were to write their problems on a piece of paper and throw them in a pot, at the end of the day we would choose to take our own problems back. The point being, life is hard (in different ways) for everyone. When the going gets tough, just remember that you are braver than you believe and stronger than you seem (thanks, Christopher Robin). The end.

And when you don’t think you can take any more, try to live like someone left the toy chest open:

Amidst all of the heartbreaks and tears that have been going on lately, there’s been a lot of great stuff, too!

We had not one, but TWO birthday parties for Ava. She’s finally made it to double digits. She got a lot of super cool gifts that most 10 year olds (and maybe 29 year olds) would love. Did you know they have a dance version of Twister?? Umm, I don’t know how it works exactly…but I’m pretty sure it’s going to be awesome (and a Dahl family purchase). And obviously with two birthday parties, comes two birthday cakes. In order to make the super cool cakes, a grand total of 5 9×13 cakes were baked – 4 for the cakes and 1 for the cake burglar, Scout. (seriously, this dog has a cake problem!!) 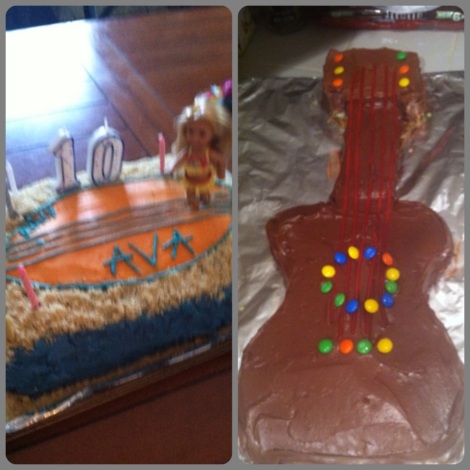 Surfer and Rocker cake – perfect for Ava! The surfer cake was a Jenny Scott original.

Graham got some quality man time in. He played COD with Uncle Peter and talked football with his Uncle Jake and Pops. Both Jake and my dad were a little (or a lot) disappointed to see Graham in a Skins jersey on the day they rivaled the Bucs. The good news is that the Skins won. 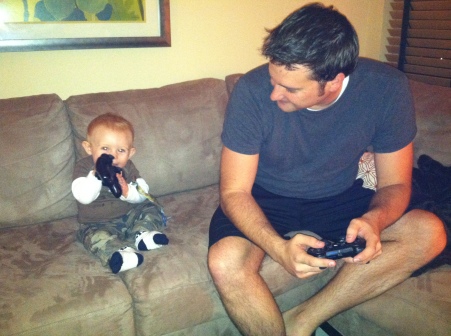 Video games….ugh….not looking forward to when he actually wants to play instead of just drooling on the controller.

We had some good (and some not so good) cuddling with Scout.

We had a great visit with Joy and Jenny! I’m so proud of both of these girls – they are both “braver than you believe”. I can’t wait to see what the future holds for them.

Graham and Scout realized that they can play “fetch” together. I’m still not quite sure which one is actually fetching the ball. But they are certainly having fun with their new game! (I’m pretty sure Graham thinks he’s a puppy…I’m planning a post completely dedicated to this – currently working on documentation to prove my point.)

Trying to get the ball back.

We ran lots of errands today, including Target to get birthday cards for someone special. While at Target I was reminded that there’s a little bit of country out in these parts – 3 women said “heyyyy, suga” (pronounced, shooga) to Graham. I had a brief home-away-from-home moment….it was great. 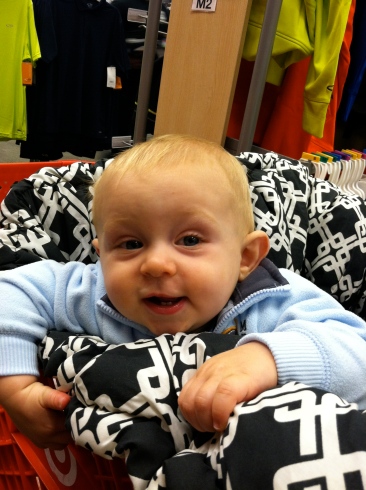 We also went dress shopping with Aunt Jill. Graham has proven to be a man’s man. He. Hates. Shopping. We took a brief break from the dresses and tried on a few hats. I think I fell in love all over again. As did all of the women in the store – not kidding, there were at least 4 other women lurking around smiling and laughing at this ham. 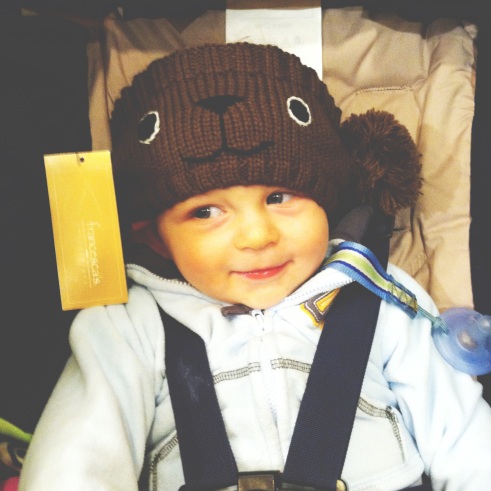 I can’t handle this look…melts my heart.

But…the most exciting part of the week/month/year/decade:

That’s right, folks, I’m going to Europe!!!!!!!! I seriously can’t believe it. I was on the phone with Steve when I read the email and was actually speechless. I get to choose where we go and right now Italy is in the lead! It’s surreal. I don’t think I’ve ever been so surprised by something. A couple of weeks ago Steve had asked me what I wanted for our anniversary present – I said maybe a trip somewhere, just the two of us. I was thinking something like a B&B out in the mountains or something. Certainly not Rome. But happy anniversary/merry christmas to us! We’re going to Europe!

-my husband is awesome.

-my dog has an addiction to baked goods.

-aforementioned awesome husband is taking me to Europe.

-I love you, Steve Dahl.